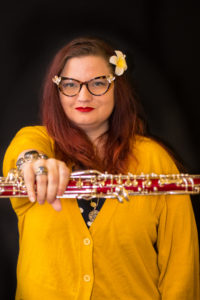 While attending the University of Memphis, her specialization was the electro-acoustic abilities of the oboe/English horn and the related compositions. Her doctoral dissertation, “A Guide to Electro-Acoustic Performance for the Acoustic Oboist” focuses on allowing the novice in the field of electronics to feel comfortable performing the new repertoire, whether fixed media, interactive computer, or live electronic processing. She has setup the most extensive database online for oboists looking to find electro-acoustical compositions.Wendy has been invited to present her research twice at the International Festival of Woodwinds in Rio de Janeiro. An advocate of electro-acoustic music, Wendy commissions music for oboe and electronics including a piece for oboe and fixed media commissioned by Dr. Scott Hines. The piece In Memoriam was a needed addition to the repertoire.

Wendy is currently the adjunct Professor of Oboe and Bassoon at Missouri Western State University. Before coming to St. Joseph, Wendy was an adjunct professor at Drury University in Springfield MO teaching Music Appreciation and coaching chamber music groups. While pursuing her Doctorate, she taught Music Appreciation at the University of Memphis. Previously, she taught elementary music K-5 in the Houston Independent School District, having a majority of ESL students. Wendy continues to maintain a vibrant oboe studio of upcoming double reeds since 1996, with students going on to pursue music and oboe in college. Her studio has resided in Texas, Mississippi, Tennessee, Alaska, Missouri, and Kansas.

Wendy has performed in Buda, Prague, Vienna, Shanghai, Beijing; as well as Alaska, and many other states. She was the principal oboist of the Memphis Repertory Orchestra from its inception until moving from Memphis. During this time she was the English hornist on a CD with MRO featuring Dvorak’s Symphony No. 9 available on iTunes. She has been a soloist at Pauline Oliveros’ Deep Listening Institute of Houston’s “60 Minutes of Minutes” and was the 2010-2011 winner of the Raymond M. Lynch Oboe Award for Outstanding Achievement. Wendy was chosen to perform the Strauss Oboe Concerto at an International Double Reed Society Conference during a masterclass with Eugene Izotov. She has performed in masterclasses for John Mack, Mark Fink, Joseph Robinson, Kevin Vigneau, Mark Ostoich, David McGuire, Jacqueline Leclair, and Tom Boyd. She performed a medley of Hollywood themes with Tom Boyd (oboist of over 1000 Hollywood soundtracks) in concert at the University of Memphis Double Reed Festival. Wendy was a Classical Music Contributor to KCMetropolis.org, Kansas City’s former online journal of the arts.

Wendy is on the substitute list for the Memphis, Corinth, Springfield, Paducah, and Jackson Symphonies. She has performed new music with NewEar Contemporary Ensemble in Kansas City. During the summers she is frequently a musician at the SPLICE Workshops in Kalamazoo, MI working with electro-acoustic composers performing new works for the instrument. Before summers at SPLICE, she could be found at the Taneycomo Festival in Branson, Mo. Wendy plays in numerous ensembles in the Kansas City and surrounding areas including new music groups, orchestras, wind ensembles, chamber ensembles, and musicals.

Wendy is a member of the International Double Reed Society, and the Kansas City Alumni Chapter of Sigma Alpha Iota. Find more of her at WendyGrew.com.